This is the ninth installment of a 26-part series of players we'd like to see at Atlanta United FC as either a Designated Player or general roster spot. They will not all make sense but we will try to convince you anyway. #HailUnited #KingsOfTheSouth 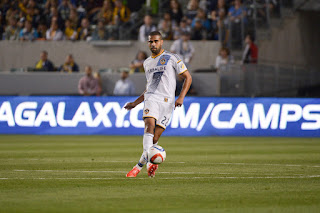 Honestly, I wouldn't consider Leonardo a guy Atlanta United should necessarily target, but he'd be the kind of player AUFC could end up with if MLS still holds an Expansion Draft in 2016.

Then why are we talking about him?

He's a 6'2" center back with a couple years under Bruce Arenas on one of the best clubs in MLS that resulted in a couple MLS Cups.

Depends on who you ask. Galaxy fans have kinda soured on Leonardo. Just watch Galaxy Twitter in games he plays.

BUT he was voted the Galaxy's Defensive Player of the Year in 2015, aka just last season.

I don't know what to think

Think this: with the signing of Jelle Van Damme and emergence of Daniel Steres, Leonardo has become expendable. He's only played in two MLS regular season games in 2016 and there's no way LA wants to hang on to that $160,000 contract. Even if that isn't crazy expensive, it is for that kind of usage. It doesn't mean he's necessarily worthless though.

You gotta pitch me better

There are much worse options for centerback on an expansion side.

Why would Atlanta United want Leonardo?

See the above. There are worse options than a 28-year-old from a good system who understands MLS. I think he's also past occupying an international spot too, even though he is from Brazil.

If there is an Expansion Draft, yes. LA would likely not use one of its 11 spots to protect Leonardo and he fills a need of any soccer team. And even if he might not be worth the $160K he's being paid now, if selected in the Expansion Draft Atlanta United is able to renegotiate with the player.