From Zlatan to Adu: Maximiliano Urruti - U

This is the sixth installment of a 26-part series of players we'd like to see at Atlanta United FC as either a Designated Player or general roster spot. They will not all make sense but we will try to convince you anyway. #HailUnited #KingsOfTheSouth 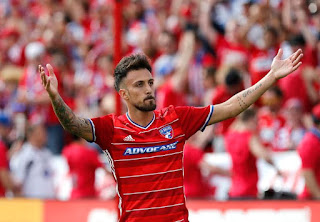 Maxi has been around MLS for a couple seasons, spending the majority of that time in Portland with the Timbers, after leaving his native Argentina.

Why's he wearing an FC Dallas jersey in that pic then?

Because Urruti's contract wasn't picked up by Portland after the 2015 MLS Cup winning campaign. He was placed in the MLS Re-Entry Draft where he was scooped with the no. 1 pick by Dallas.

Why want someone who was thrown on the scrap heap?

Urruti has skills, just maybe not enough for Portland to justify his $200,000 2015 salary after they got better production out of other players.

Still not selling me on Urruti

Ok, his 15 goals in 65 appearances for Portland isn't great, but he's found life in 2016 with Dallas. Especially at the start of the season.

That was pretty slick

I know. Maxi has 3 goals in 11 matches so far this season. He's also got the most shots and shots on goal for Dallas proving his work rate is A+.

Just a guess, but considering Maxi was a Re-Entry player, I wouldn't be surprised if his salary was dropped from $200K for 2016. Even there, that's not a bad price for a guy who's going to be a pest and score some goals up top.

Just as much as any other nonsense I'm throwing out here. Probably won't be able to get him away from Dallas for 2017 though.