This is the second installment of a 26-part series of players we'd like to see at Atlanta United FC as either a Designated Player or general roster spot. They will not all make sense but we will try to convince you anyway. #HailUnited #KingsOfTheSouth 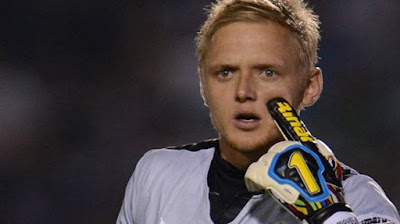 William Yarbrough came into most casual US soccer fans' attentions when Jurgen Klinsmann called the goalie up to the senior team in early 2015.

The first game action he saw in the stars and stripes was in the second half against Switzerland, where he let one past him.

This cap-tied the dual-national Yarbrough over Mexico where he had played with youth national teams.

Yarbrough has never seemed to have a solid hold on the GK spot since arriving at Leon from Pachuca in 2012.

The club has had Liga MX success while Yarbrough has been a part of the team.

Have some highlights. Most of these are old. It doesn't look like Yarbrough has played in a league match since his return from the Gold Cup.

What does William tweet about? He really only RTs Leon's official bar.

HE COULD DO THIS FOR THE SOHO LOUNGE.

Does This Make Sense?

Yarbrough, who has three brothers who live in the US, has said in the past that he considers himself "100 percent Mexican, and sometimes roots for Mexico over the United States."

He accepted the US call-up. And remember, he's not getting a ton of love at Leon.

A move to MLS would make more sense now. AND THE MLS LOVES TO PAY USMNT PLAYERS.

He immediately adds a level of interest to Mexican fans. Goalies have a longer shelf life so age isn't an issue.

William Yarbrough's salary wouldn't be outrageous, but he'd probably get a nice raise because THE MLS LOVES TO PAY USMNT PLAYERS.