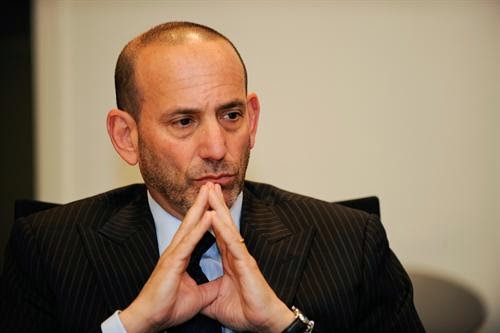 In true Major League Sucker fashion, I can't seem to figure out if fans of MLS like the league, Major League Soccer's structure and MLS commissioner Don Garber.

Like, there is a lot of stuff to factor in here.

Don Garber gets ragged on for being -- I don't know. Too controlling? Ambitious?

Then the whole MLS promotion-relegation argument. In that will the MLS and American soccer in general be legit without it?

MLS continues to be called a "retirement league," but never by true supporters at least from what I can tell.

And even the USMNT head coach Jurgen Klinsmann isn't all on board with the domestic league, even though he is not afraid to use a player (Miguel Ibarra) from the NASL either.

Without historical knowledge I can't tell if the gentle trolling of MLS by fans is just the same as NFL diehards being critical of the Shield and Roger Goodell or something more.

It seems to be all in good fun. I don't know where I was going with this.