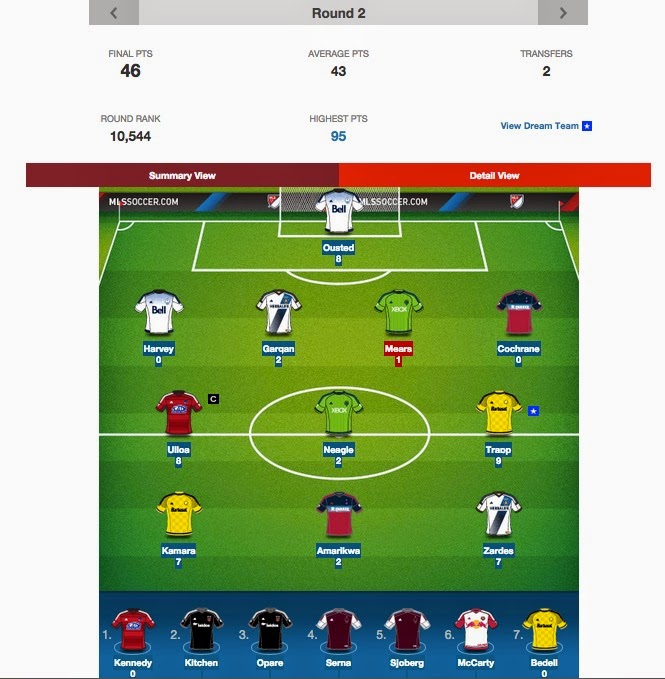 Somehow Tommy Wears Copas got both better and worse this week in Round 2 of Fantasy MLS.

Changes from Round 1 included the addition of Axel Sjoberg (who was on bye) of Colorado to bolster the defense and Kei Kamara added to the stagnant offense.

My stud in the backline, Tyrone Mears, from week 1 suffered from Brad Evans at CB and then a groin injury and then San Jose Earthquakes scoring three goals.

Basically the defense was scrubby this week. Three points from four defenders.

And that's after the very good move to Kamara up top. Gyasi Zardes got into scoring, and Will Trapp and Victor Ulloa were solid contributors.

Really need to figure out that captain designation though. Had it on Ulloa this week when it should have been on Trapp, Kamara or Zardes.

Here's what it ended up meaning. Less points scored, but not as far off from the best scores of the week. Also moved up in the overall ratings.

For Round 3 it was again about fixing the defense.

Dropped Jordan Harvey ($7.4M) and Lamar Neagle ($8.5M) to clear up $15.9M in salary, plus had some leftover from last week. Neagle was expensive and going into a bye, Harvey was underperforming for the price and didn't start in Round 2 and I don't know why.

Picked up defender Jermaine Taylor of Houston who has been playing great (15 pts) for the $6.6M price and NYC FC's Mix Diskerud for $9.1M because he's been playing pretty well and why not?

This is the tale of two opponents though. Taylor has a tough draw against the LA Galaxy on the road (gross). Mix has Colorado on the road as well (yay).

I'll also have each of these guys for at least the next two weeks. NYCFC has a bye in round 5. 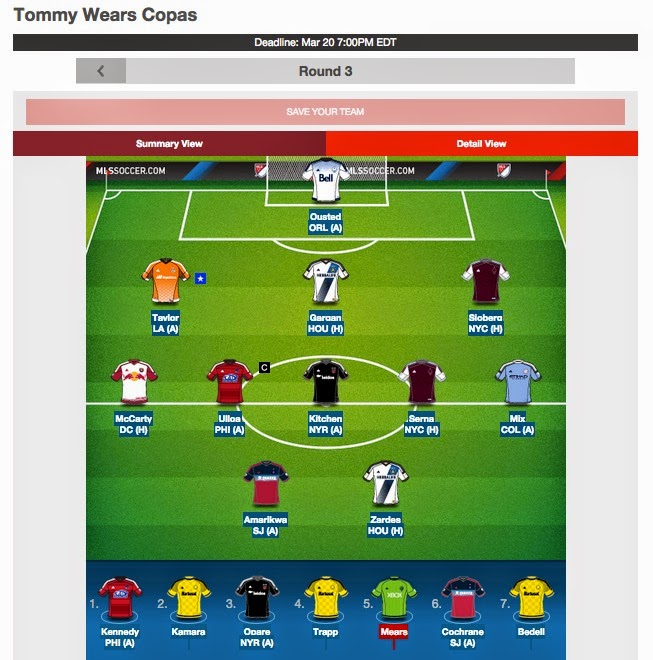