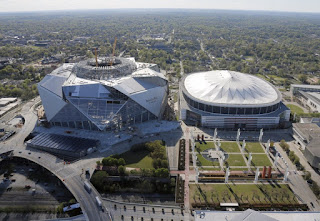 Are we happy about the new Mercedes-Benz Stadium delay? Of course we aren't.

Are we that upset about it? No.

Some Atlanta United fans have taken it upon themselves to petition the club for better compensation over the missed games at the Benz.

Ok, fine. Whatever. It's the internet and you can hide behind a "Sad Atlanta United Fan" moniker and bitch and try to lay out why you're being mistreated as a fan. But you're being a little misguided and spoiled here.

The club has been more than fair in what it has given supporters in return for the venue changes. ATL UTD previously refunded season ticket holders 10% value for each seat. Sent some merch credit over. And guess what? Bobby Dodd has been amazing. Atlanta United even holds the highest average home crowd in the league.

And because one game was moved out of the stadium you know need what? A quarter of your ticket prices refunded. And a freeze on season ticket price increases.

This club has done everything right from the start. And the thing it's gotten wrong, the stadium, it's made amends for and expect them to do it again for this delay. Everyone involved wants to be in the Benz. This wasn't some conspiracy to sell season tickets by promising the stadium would be open when they knew it wouldn't be.

Atlanta fields an exciting team on the field and has a passionate fan base in the stands. Don't let your entitlement ruin it.