This is the tenth installment of a 26-part series of players we'd like to see at Atlanta United FC as either a Designated Player or general roster spot. They will not all make sense but we will try to convince you anyway. #HailUnited #KingsOfTheSouth 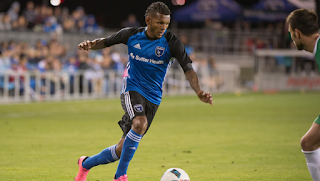 Quintero is a recent MLS guy, having joined the San Jose Earthquakes on loan from Lobos BUAP of Mexico for 2016. He appeared in 30 games for the Earthquakes this past season.

Was he any good?

Yeah, he was a solid contributor. Quintero finished the season  with 4 goals and 3 assists including this screamer.

The 28-year-old has been a constant presence on the Panamanian national team since 2007, so that's pretty good.

You said he was on loan?

Does this make sense for Atlanta United?

Atlanta United has a lot of midfielders on its small roster, so picking up a Quintero (and using an international roster spot in the process) is highly unlikely. Plus, if his move away from his Mexican club were to be made permanent it would seem like he's staying put in San Jose.