This is the seventh installment of a 26-part series of players we'd like to see at Atlanta United FC as either a Designated Player or general roster spot. They will not all make sense but we will try to convince you anyway. #HailUnited #KingsOfTheSouth 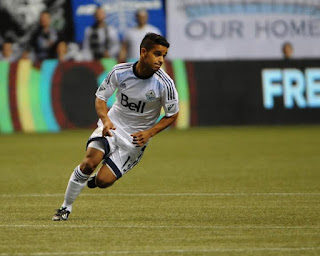 Cristian Techera arrived in MLS last season with the Whitecaps. The slight midfielder contributed 7 goals and 5 assists in 22 appearances.

Was is necessary to call him "slight?"

Yeah, tied for smallest in the league with Real Salt Lake's Joao Plata. Even smaller than MVP and Atomic Ant Sebastian Giovinco (5'4"). So at least we know small players can succeed in MLS.

Is his salary as small as his stature?

Unfortunately not. While he spent 2015 on loan from his native Uruguay's River Plate for a paltry $60,000 on the books for Vancouver, Techera's transfer was completed in January and had some of that TAM money used to throw $300,000 at the 24-year-old.

Has he been worth it?

Techera has appeared in 15 games this season, starting 13, and had back to back games with assists. He may not be contributing goals yet but his track record doesn't suggest that his scoring will just dry up. Maybe consider it a minor drought.

He is still entering his prime and locking up a dynamic, shifty guy for a relatively low price for an impact player would be significant. Techera has had success when surrounded by a number of different talents (I mean, who wouldn't but you get what I'm saying) so his adaptability out wide could be key.

Pipe dream. Vancouver spent $$$ on him just this year.