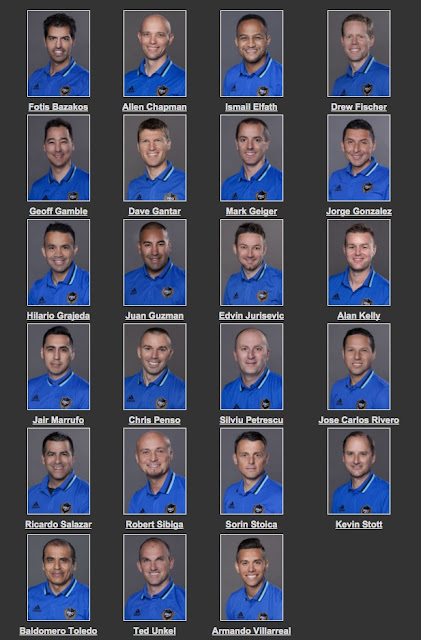 Too much gets made of referee assignments. There shouldn't be an issue of who the officials are going into the game. That being said, US soccer referees could probably be better. But that could be said of most things.

In MLS, PRO - Professional Referee Organization - oversees the crews. PRO also is in charge of NASL, USL, NWSL, USSF, Canadian soccer federations and the Lamar Hunt US Open Cup. So it is kinda a big deal.

Above is the 2016 PRO roster for head referees. Are some worse than others? Do Atlanta United fans need to take notice of and get familiar with some of these names?

The Bent Musket says all you need to know about Bazakos. When you got a # you made it. #WTFotis

Apparently Chapmen's got a history of controversy with Real Salt Lake. Back when Jason Kreis was still coach, "Kreis has actually changed where he sits on a bench and refused to shake hands with Chapman before the game."

He even did enough to once be called out directly by Omar Gonzalez.  Elfath was rewarded with refereeing the MLS All-Star Game in 2015 though.

Apparently Fischer's online presence is mostly positive reinforcement from the refereeing community. Has been said he doesn't have any control.

Gamble is basically the opposite of Fischer, being called out by the refereeing community. The Colorado Rapids and New England Revolution also had a tough go with him a while back.  Has maybe gotten better?

Toronto FC and Michael Bradley have the most beef with Gantar, possibly ruining their chances at a playoff appearance in 2014. He even followed it up with a poor performance at the beginning of 2015. Gantar is even Canadian. For shame. Only TFC seems to care.

"Generally regarded as one of the top referees in MLS," yet Geiger finds himself in hot water a lot. Such as the Jermaine Jones incident. And even outside MLS as when he officiated Mexico-Panama in the 2015 Gold Cup.

While Gonzalez has been critiqued for some missed calls, he also gets commended by the referees out there. Whose side do you take?

How the mighty have fallen? Grajeda was pegged to call the MLS Cup Final in 2013 and was voted ref of the year. But he didn't do so hot. Same happened during an NCAA Final that year. Since then? So-so.

Jurisevic flys more under the radar. Some older posts suggest he can be a bit inconsistent. Doesn't seem like anyone minds him as an assignment though.

A relative newcomer in MLS and PRO. Kelly is from Ireland and in his second season in America/Canada (2015) won referee of the year. Seems like a coup to have gotten him stateside. A+.

People like Marrufo. Was lead official for the 2015 MLS Cup Final, which some Columbus Crew fans may not like him for (that one goal was more of a linesman issue though). Referee of Year back in '08.

Going to use this Massive Report power ranks again that points to Penso wanting to be  the center of attention. Gross. Refs like some of his decisions though. Meh.

Basically only negative reviews of Petrescu's games. People didn't like him at MLS Cup. He was suspended in 2015 for missed calls. But he was MLS Referee of the Year in 2012? Maybe that's not a good barometer.

Getting arrested for fraud won't endear Rivero to many people. But when he isn't ripping off the government then he doesn't do half bad.

Salazar may be the true Heel of MLS PRO referees. This poll voted him the worst ref in MLS in 2013. There was a Change.org petition. Fans call him "Red Card Ricardo."

A newer referee. Small sample size going for Sibiga. This Ottawa Fury fan probably very much dislikes him though.

Stoica is not well-regarded. Either by fans who call him "Village Idiot," or refs that say he needs a backbone.

Stott has been around since 1996. He's had some moments of controversy, humor and praise. Going with my gut, I'd be happy to see him as an assignment.

Holy shit that's a great name. Nobody likes Toledo though. Not one person says anything good about him. Guess there must really be a lack of quality refs for him to still be out here.

Unkel was tabbed for the USOC Final last season and has not been reffing MLS games long. People seem to spout off about him a lot though.

Refs like Villarreal's calls in tight positions. Besides the LA Galaxy there doesn't seem to be much complaint about him. Let's end on a high note.

Note: if you were looking for the referee in charge of that US Open fiasco where Clint Dempsey tore up his book, that was Daniel Radford, a 4th Official. I guess they can call US Open games but not head referee MLS.