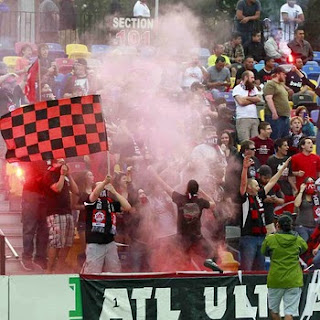 Diehard Atlanta Silverbacks supporters group Atlanta Ultras was told by the Silverbacks front office that the group has been given a two-match ban to Finley Stadium by Chattanooga FC. The Silverbacks are set to take on CFC in Tennessee for a 3rd round Lamar Hunt US Open Cup game on Wednesday May 27.

The ban stems from a US Open Cup game between Atlanta and Chattanooga in 2014.

“The fan group known as the Atlanta Ultras, after several warnings from our staff, set off fireworks inside Finley Stadium while the stadium was still crowded with fans," said Executive Director of Finley Stadium Paul Smith in a prepared statement.  "I’m sure you understand how dangerous this could have been. We encourage our fans to have fun and be loud, but threats to public safety can never be overlooked.”

AU says the claims are greatly exaggerated and is asking for the ban to be lifted.

As it stands anyone seen in Atlanta Ultras gear will be escorted from the stadium.