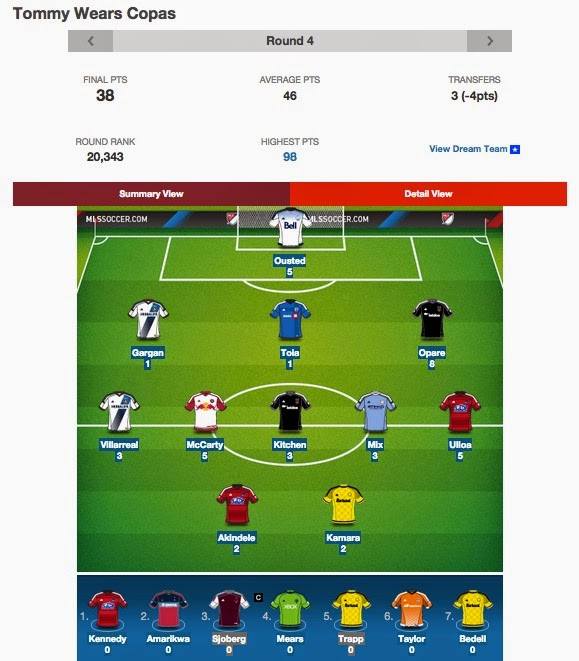 It's gone to hell.

Who didn't check their lineup near before Saturday games? Tommy Wears Copas did not.

So when Sjoberg did not play due to injury and still had a captain badge on him, TWC got nothing in return.

Lie, auto sub saved the team by putting in Kofi Opare, who in his first game action had a team-leading 8 points. New defensive pickup Toia did nothing for us though. Neither did heel Dan Gargan.

I want to drop him so hard but haven't been able to. Left a productive 6 pts from Tyrone Mears on the bench too because I thought he was hurt. For shame.

Look at how these ratings dropped due to the pathetic 38 pt showing.

Getting hit with a lot of byes in Round 5. Columbus, Montreal and both New York teams.

REALLY want to get rid of Gargan but after trying the extra/penalty transfer to no good last week, have to hold off because TWC is missing a lot of attack.

PROBABLY SHOULD USE THE FANTASY MLS WILDCARD. I won't.

Had an extra $2.2M after transfers last week, and am dropping Mix Diskerud due to price, bye and performance.

Initial plan was to use all extra money on a forward. Still going to do that, but have to get some midfield action too. Unfortunately can't touch the backline.

Getting rid of Chicago's Quincy Amarikwa ($6.9M) and picking up Portland's Fanendo Adi ($9.3M). Adi is probably going to cool off now, but I'll at least have him without bye for a couple weeks. Continuing with Timbers players to replace Mix. Going with my boy Darlington Nagbe in midfield ($8.5M).

Defense will be heavy this week. Hoping for clean sheets. And I swear Gargan is gone next week. 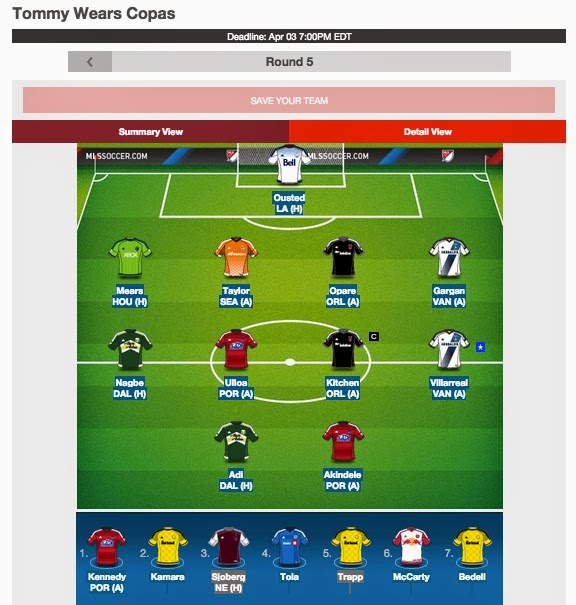